The Key to Winning is the Hand-Off 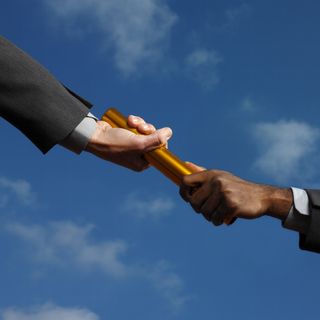 Yet the Santa Monica Track Club Men's Relay Team holds the world record for the same distance in 1:18:6. Granted each man ran 200 meters of the 800 meter race. It goes to show that a group of people working together towards a common goal can often produce a better result than one person can do on their own.

No one would ever deny that both Wilson and the track team are world class.

Both Wilson and the Track Team have the same goal; cover the distance of 800 meters as fast as possible.

There approaches were different. The team was able to leverage and combine talents. Walter was on his own.

One of the things Walter doesn't have to worry about in his race was dropping the baton. The team has to think about that. In fact, it is one of the keys to their success. If anyone drops the baton, they lose.

The baton pass is critical. Yes, having the right talent is important too. But all things being equal, that doesn't play into the equation. All the parties are talented. Or should I say, fast.

I propose that even though most businesses, unless you are a solopreneur, have team members working with them, they are dropping the baton often.

In business, your success as a leader and effective manager comes down to the baton hand-off. Let me put it in business terms. How well you convey information or communicate to people on your team is critical. Specifically, communicating the results you expect and how to perform their job or responsibilities the best they can is the key.

I have found that the simplest, most effective, reliable and proven way to improve or maximize employee performance is through quality systems.

I have seen businesses try to win the race without them and they NEVER perform as well as companies that use systems to ensure quality performance.

Handing someone a system will enable them to be the best they can be in their role in the business. And if your people perform well, then your business will win!

Want to be World Class? Then your job is to build a systems-driven business, made up of great systems, and make sure you get them in the hands of your people.